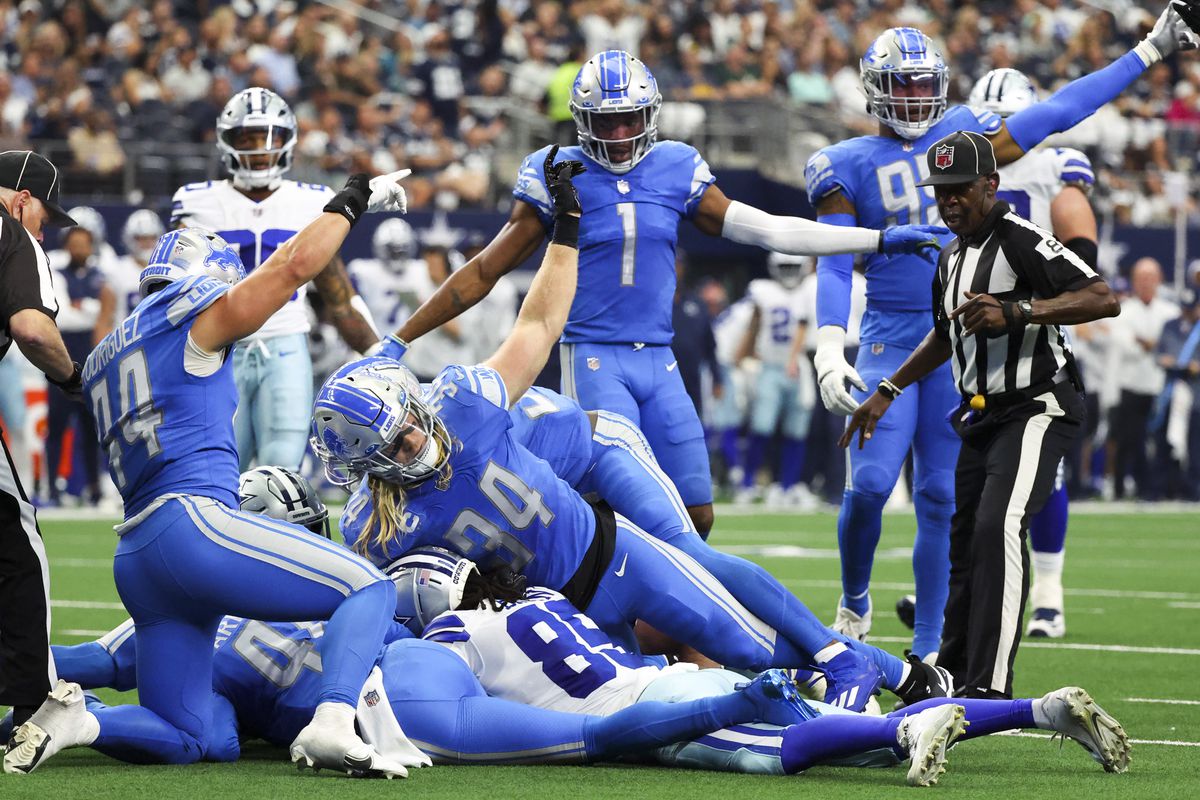 ARLINGTON – A guarded fight featured the initial 30 minutes of Sunday’s matchup among Detroit and cowboys Dallas, with Detroit’s safeguard driving the charge to a 6-3 halftime lead.

It kept on being a cautious confrontation into the final quarter, yet eventually, Dallas profited by four final quarter turnovers by the Lions’ offense to initiate a 24-6 win. The misfortune drops Detroit to 1-5 on the season.

Sunday’s misfortune wasn’t on the Lions’ guard. Briefly straight game the Lions’ offense neglected to record a score and had basic turnovers. Detroit was in need of help obnoxiously with running back D’Andre Quick (idle) and wide collector DJ Chark (IR) out, and space beneficiary Amon-Ra St. Earthy colored left with a blackout in the main quarter, yet that is not a remotely good reason for how unfortunate they’ve played the most recent fourteen days.

Dallas scored the game’s most memorable score following Lions quarterback Jared Goff’s fifth interference of the time on the Lions’ initial ownership of the final part at the Dallas 18-yard line. Trevon Diggs got the pick.

Dallas went 82 yards in seven plays and scored on an Ezekiel Elliott 1-yard score race to provide the Cowpokes with the main lead of the day at 10-6.

The Lions were ready to retake the lead from the get-go in the final quarter after a staggering drive situated them with a first and objective at the Dallas 1-yard line. In any case, running back Jamaal Williams mishandled the ball and it was recuperated by linebacker Anthony Barr at the half yard line.

Detroit’s guard made a decent showing to compel a dropkick and allow the offense another opportunity, yet Goff was caught once more, this time by cornerback Jourdan Lewis at the Dallas 47-yard line. Dallas transformed that into one more Elliott 1-yard score with 2:46 left to give the Cattle rustlers a 17-6 lead.

Dallas chilled the game on Goff’s third turnover, a strip-sack bumble at the Detroit 23-yard line they transformed into a 2-yard Peyton Hendershot score to give them a 24-6 lead.

Fittingly, the game finished on a couple kneeldowns after another Goff bumble, Detroit’s fifth turnover of the game.

QB examination: It was a forgettable day for Goff, who wound up turning the ball north of three times. He completed 21-of-26 passing for 228 yards without any scores, two interferences and two bungles. He was sacked multiple times and wrapped up with a 71.2 passer rating.

Cattle rustlers quarterback Dak Prescott was playing in his most memorable game since harming his thumb Week 1. He was an effective 19-of-25 passing for 207 yards with one score and no captures for a 113.2 rating.

Important: Cornerback Jeff Okudah was all around the AT&T Arena turf Sunday. He was spectacular supporting the run and completed the day with 15 handles, including a tackle for misfortune that constrained a first-half dropkick. It was Okudah’s most impressive showing of the year.

Lions tenderfoot pass rusher Aidan Hutchinson scored sacks No. 4 and 5 on the year. He wrapped up with three handles, two sacks, three quarterback hits and a tackle for misfortune.

No. 2 tight end Brock Wright got every one of the four of his objectives for 57 yards. Wright came into the game with only one catch on the season for 25 yards.

Newbie debut: Second-round pick Josh Paschal made his NFL debut Sunday subsequent to passing on the initial five rounds of the time rehabbing a games hernia medical procedure he had over the mid year.

Paschal got great push along the inside and added up to two handles in the challenge.

Injury report: St. Brown got a 4-yard pass on a second and 11 play at the Dallas 21-yard line late in the principal quarter and made an effort to the rear of the head as he was going to the ground.

As he got to his knees, St. Earthy colored shook his head a little. He got to his feet and an authority removed him from the game to be assessed. St. Brown went into the clinical tent on the sideline for various minutes and afterward arose and went right to the storage space. Not long after, the group precluded him with a blackout.