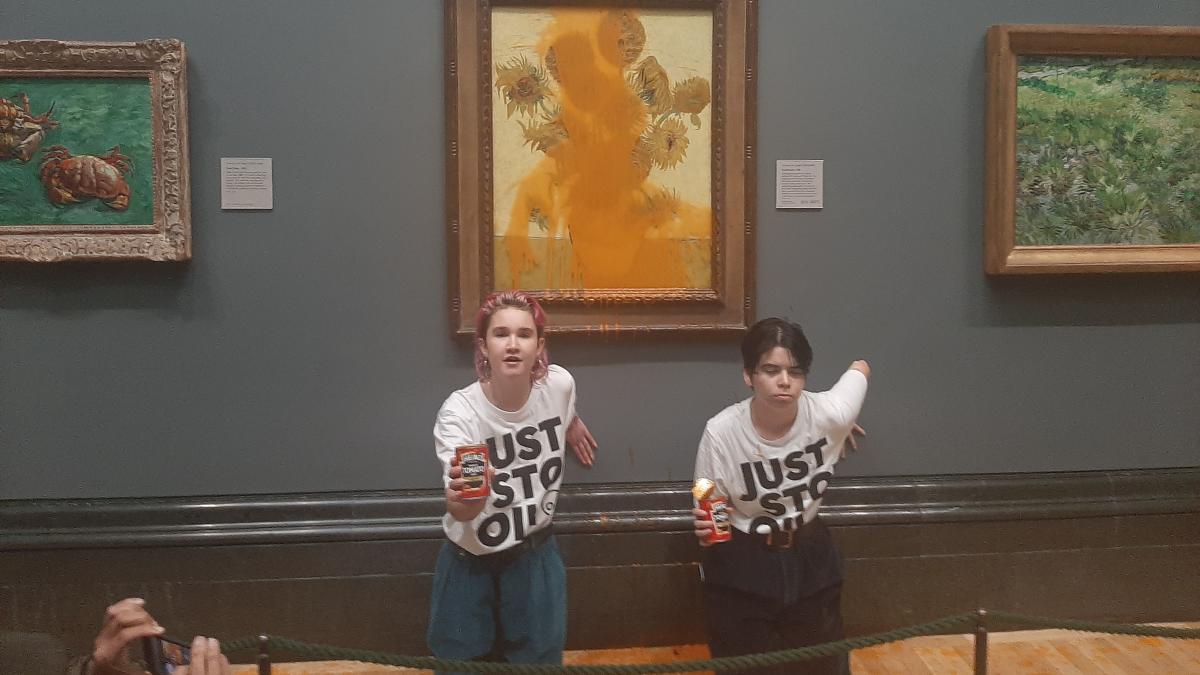 In a demonstration against fossil fuels, two Just Stop Oil activists were detained after they threw canned soup at one of Vincent Van Gogh’s sunflowers painting most well-known works of art.

After throwing two cans of Heinz tomato soup over the Sunflowers painting from 1888 shortly after 11 a.m. on Friday, the protesters—who were wearing Just Stop Oil T-shirts—knelt down in front of the artwork and appeared to attach their hands to the wall beneath it.

The image, which is protected by glass, and some of the golden frame were stained with tomato soup.

Security quickly led the visitors out before locking the doors to room 43 of the gallery, where the picture is displayed.

Two nonconformists wearing Shirts with the trademark “Stop Oil” hurled jars of soup at the famous composition, a video posted on Twitter by the Watchman paper’s current circumstance journalist Damien Gayle and retweeted by the eco-activism bunch showed.

Subsequent to sticking themselves to the wall, one of the activists yells: “What is worth more, craftsmanship or life?”

“Are you more worried about the insurance of a canvas or the security of our planet and individuals?” she inquires.

In the video, somebody can heard holler “good gracious” as the soup raises a ruckus around town, and someone else yells “security?” while soup dribbles from the casing onto the floor.

Stop Oil said in a proclamation that its activists tossed two jars of Heinz Tomato soup over the work of art at 11:00 am (1000 GMT) to request that the UK government end all new oil and gas projects.

It said the artwork has an expected worth of $84.2 million.

It was unclear at away if the painting is covered with glass.

Sunflowers by Vincent van Gogh are defaced by activists at the National Gallery.

Art vandalism and art destruction are always acts of authoritarianism.

Watch what their happened :